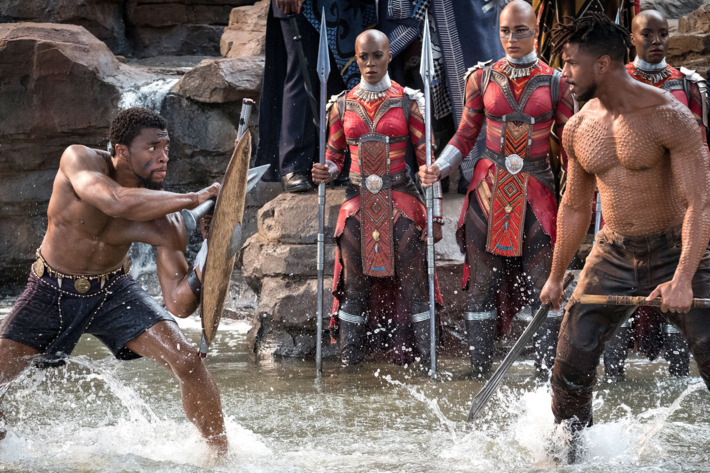 Directed by Ryan Coogler (Creed, Fruitvale Station), Black Panther is the most ambitious Marvel movie yet. To see that ambition so beautifully realised is a fantastic thing. Yet, underneath all the spectacle and the action, there are layers and layers of social commentary to be mined. Lessons to be learned. Most of these lessons are to do with race, racial identity and the struggles of African-Americans compared with native Africans. I’m going to be very careful writing about these. I’m a white boy from Southern England. I have the perspective of an outsider on these issues; while I may empathise completely, I will never truly understand. And that’s okay. For me, I’m not meant to have incredible societal insights on racism and prejudice, I’m just meant to listen, and to learn.

2.) Movies can be more than one thing

I’ve seen a lot of people on social media complaining about Black Panther, saying it was ‘too politicised’, ‘ruined by SJWs’ or ‘too liberal’, with all these comments followed by ‘it’s just a Marvel movie! Don’t make it anything more than it is!’ This is baffling to me. One of the main qualities of a great movie is that it sends a message. It gets its audience involved, it gets them to think. Tiny minutia don’t bring the film down in the slightest. Take Patty Jenkins’ Wonder Woman as an example – it has a shaky villain and third act, some cartoonish side characters, but you know what? I would still consider it a great movie because of the message it presents to the audience. Girls can be children of gods, growing up to save the world, just the same as boys. That message is one we haven’t seen in Hollywood; it’s a message that needs its own film to deliver it. If this confuses you, or you find it ‘too political’, then you are misguided on what cinema is. Or, more generally, what art it is.

Yes, you could argue that Hollywood is equally misguided, as they churn out purposeless movies like Transformers: The Last Knight and King Arthur: Legend of the Sword, but that’s where films like Black Panther and Wonder Woman come in. Wonder Woman  grossed $821.9 million worldwide in 2017 and Black Panther has made $243 million in its opening weekend – and that’s just at the US box office. These movies are not only critically acclaimed, they’re marketable and they’re money earners. This is a lesson for Hollywood and a step in the right direction for studios to finally start understanding its modern audience. People don’t want every movie to star a white guy named Chris.

While crawling through audience reviews of the film before I saw it, I noticed a lot of people, who hadn’t even seen the film, complaining about the ‘bias’ of critics and how they’ve all been ‘paid off’ because Black Panther can’t possibly be good enough to earn a 97% rating on Rotten Tomatoes. Also complaining how no-one can criticise the movie without being called a ‘racist’. So, I’m taking a sidebar to talk about how Rotten Tomatoes works and the concept of free speech.

Now, we talk about the critics afraid of being called racist. I can guarantee that the only times people will call you racist for critiquing a movie is if your critique of the movie has racist undertones. Black Panther is not a perfect movie and it can be criticised. Some of the CGI is shoddy, and some of the twists are very predictable, but no-one is going to call you racist for those criticisms. They are valid. If your criticism is that you feel threatened by the lack of white characters in the movie and how important that is to modern cinema, well, you might not be explicitly a racist, but these criticisms come from a place of fear, fear of losing control, and that fear is racially motivated. So instead of going defensive – listen. Listen to why you are wrong and learn. Debate back after if you still feel right. Because that is the important part about free speech that everyone seems to forget: You can say say what you want, and so can everyone else. Freedom of speech does not mean freedom from response. 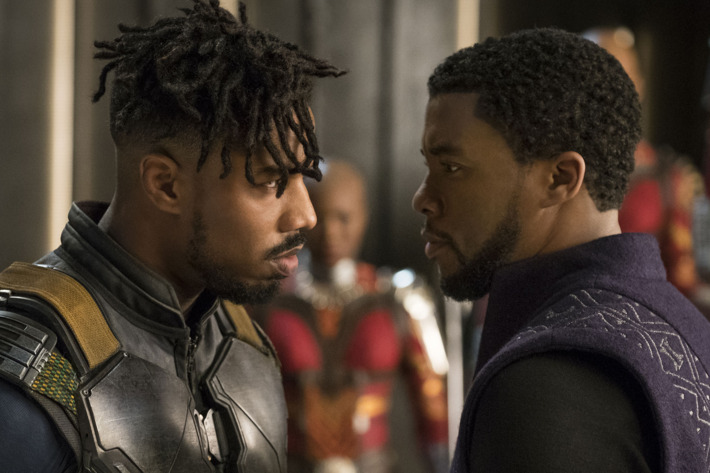 A lot of people have been saying thing along the likes of ‘Killmonger was right’. They’re not wrong and they are wrong too, and there are reasons for this. Someone else explained this much better than I ever could so I’m going to just link his blog post and highly recommend the rest of his work.

Talking about masculinity is difficult. What qualifies as manly is shifting, and some people are embracing the fluidity, others still adhering to the rigid stereotypes of the fading past. Black Panther asks what it means to be a man, what it means to be a king, and doesn’t really answer the question. Sure, it presents answers, but leaves the audience to choose.

The titular character, T’Challa (Chadwick Boseman), is a more modern take on masculinity. He surrounds himself with strong women, gets shy around his love interests, and weeps openly. Conversely, he cannot escape the idea that to be an effective leader, an effective man, you must have physical strength too. His mirror, Erik ‘Killmonger’ Stevens (Michael B Jordan), takes this idea of masculine strength and dials it to 11. He thrives off killing, scaring his body for every kill, arrogantly believing himself fit to rule because of his victory over T’Challa. Hell, in one scene he point blank shoots his girlfriend. This is the masculinity of the past, and that’s partly why his visions of the future fail to take hold. The roots of the plant are rotten. T’Challa, while still struggling with his own kingly responsibilities of strength, is able to bring Wakanda’s resources into the world at the end of the movie because, unlike Killmonger, he is comfortable expressing emotions and letting other people in. He hasn’t got the walls around himself that Killmonger has. This shows the tragedy of the two – if Stevens had grown up the same as T’Challa, maybe we’d see a new man. One who, in a different movie, would be the hero. It’s fantastic and thought provoking. 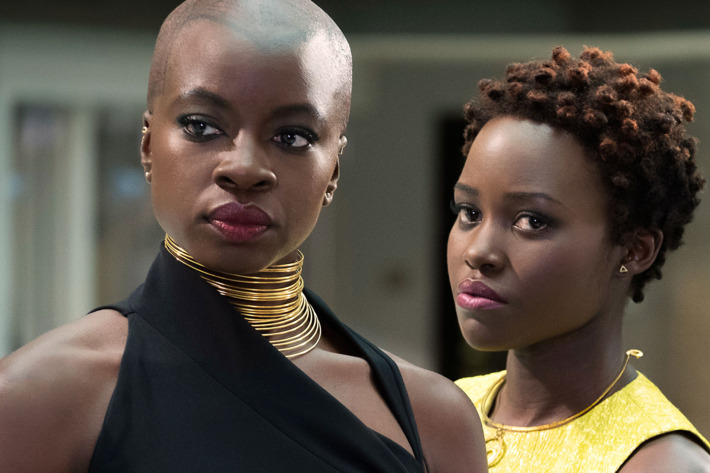 The ideas of traditional femininity are also usurped in this film. There is a rich tapestry of female characters that don’t have to compete with each-other. The conflicts between them are not petty or male-oriented, they are based in the story and the beliefs of the characters. The scene where Lupita Nyong’o’s Nakia and Danai Guirira’s Okoye argue over their loyalties to Wakanda after the death of their king is one of the most dramatic of the film. Letitia Wright shines as Shuri, a tech savvy genius with a knack for endearing comedy. Only Angela Bassett’s Ramonda fades into the background, but her relationship with her son is clearly conveyed through few glances and words. Black women are continually marginalised in Hollywood, because not only are they black, but they’re women. So to see a movie that not only features a wealth of black female characters, but to have these characters be complex individuals, not defined by their relationships to the men in the film, is a true testament to Ryan Coogler’s understanding of intersectionality. It’s fantastic.

I’ve heard a lot of praise for the soundtrack of Black Panther, produced by Kendrick Lamar. I haven’t heard nearly enough praise for the score by Ludwig Göransson. The way he merges traditional African instruments with standard film scores, throwing in flashes of hip-hop and R&B. It’s difficult to hear Killmonger’s theme and not feel something. You can’t get it out of you head. Göransson actually went to Senegaal and South Africa to sample various instruments and vocals, and you can really hear it. It’s impressive to hear a soundtrack that celebrates African, African-American and traditional Hollywood music so well. Especially considering, as Göransson put it, he’s just “a Swedish guy from one of the coldest countries in the world.” 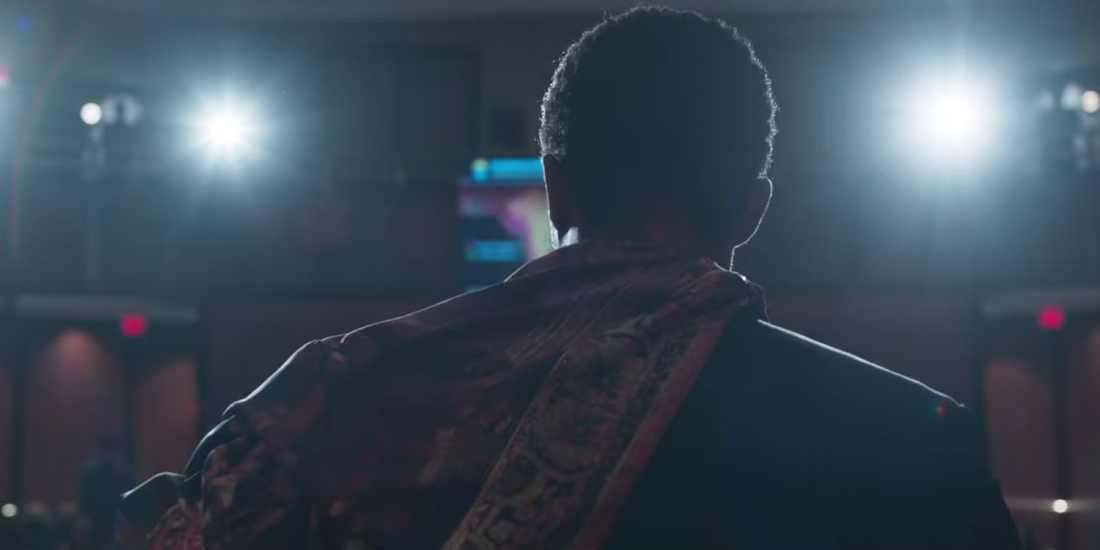 8.) The end of the beginning

Please watch this movie. It’s significant. Not only that, it’s actually quite good.

Sometimes Joe and Ollie write things if we have the time, sometimes they're alright. View all posts by jolliemebbs

One thought on “Black Panther is not just a Marvel movie”

It’s mostly entertainment and media based content. Sometimes it gets introspective. oooooooooooh